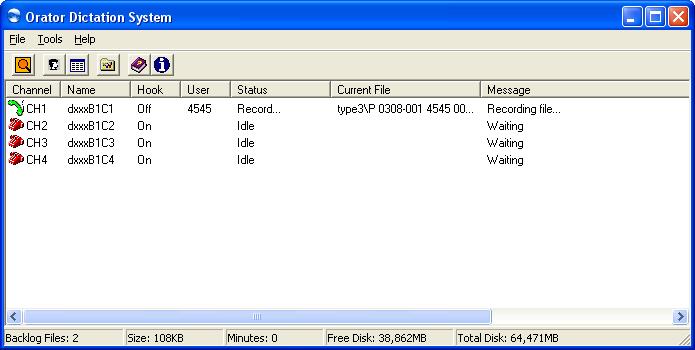 The Orator Pro system allows dictation from any touch-tone phone. Access to the system is granted by entering a unique 4-digit code. The functions of the system are tailored for dictation and transcription. The system software was created to run in a Microsoft Windows environment and was developed using the C/C++ Development Language.

The Orator Pro dictation system also provides features for Internet transfer of voice files. The system includes a conversion utility that will readily convert files from the native Orator file format into compressed TrueSpeech files that are suitable for Internet or modem transfer. With little additional setup, the Orator Pro system can upload files to an FTP site. This will allow any transcriptionist with Internet access to receive dictation files. The conversion utility can also be set up to distribute files over a local area network.

Transcriptionists can access the system in much the same manner as users who dictate. A remote Transcribe Station with foot pedal and headset is used to dial into the system. The foot pedal can then be used to navigate through voice files by playing, rewinding, and fast-forwarding. Voice prompts provide information about the files being transcribed such as status, length, job number, author, date and time of dictation, percentage completed and other job information.

The Orator Pro system resides on a single computer. All hardware components are internal to the computer. All telephone lines plug directly into the back of the system. This makes the system compact and convenient for most any location.

The Orator Pro dictation system was developed as an easy-to-use software system. Anyone familiar with the Microsoft Windows environment will be comfortable managing the Orator Pro system. Voice files can be viewed and searched using standard Windows functions. The only setup requirement is to create a user profile for each user. There are not excessive numbers of configuration parameters to set up like on some systems. The easy-to-use management of the Orator Pro system is a great advantage. The system handles routine file management tasks such as purging of old files and constant display of system resources. The length of time before purging jobs can be customized.

The advantages of digital dictation over tapes are numerous. One great advantage is that the system is accessible wherever there is a phone. For the transcriptionist, this means that the dictation is available immediately after the dictation is complete, regardless of where it was dictated. There is no need to deliver tapes to remote locations. And since the voice is available immediately, the turnaround time for receiving completed transcription can be greatly reduced. Other advantages are that all voice files are stored in one location and sound quality of digital dictation is superior to that of analog tapes.